The Story of Britpop

The early 1990’s – in America, a time in which Nirvana was the voice of the current generation and in which Grunge reigned supreme. In the UK, a time in which the excitement of ‘Madchester’, due to bands like the Stone Roses and Happy Mondays, had been fading for a few years and had been replaced by a more introspective Shoegazing scene characterized by bands like Slowdive, Chapterhouse and Ride.

Although grunge was very prominent in Europe and the UK too, a counter-movement had been slowly rising from within the British music scene. This movement – characterized by regional accents, working-class culture and ‘boys in bands’, mostly drew musical inspiration from different kinds of rock from the 60’s and 70’s made by the Beatles and the Kinks, and from 80’s indie rock, most notably music by the Smiths.

Aside from the musical influences of this movement, later called ‘Britpop’, there were more distinguishing characteristics that set these musicians apart from the rest of the current scene at the time. In contrast with grunge, Britpop used lighter sounding and very melodic hooks and choruses. The use of British references and political statements within these songs were quite a breath of fresh air for British music fans that had been waiting for a more honest and straight-forward kind of lyricism to connect with.

It could be said that this period of time in music started with one band in particular; Suede. The band’s debut album referenced both glam rock and punk, which combined created a kind of rock music that had not been released before. Suede’s debut, released in 1993, sold remarkably well. So well even, that it broke the record for the fastest selling record ever in the UK.

However, it was 1994 that would become a defining year for Britpop. This year, both of the most renowned bands of the Britpop era released their rivaling albums. The same year, the term ‘Britpop’ became widely-used, with appearances on the radio and television, consequentially cementing the term into existence. Blur released their third album ‘Parklife’, which made them the most popular band in Britain for a while that year. Meanwhile, Oasis released ‘Definitely Maybe’. That debut album became went on to exceed expectations and broke Suede’s record for the fastest-selling album in the UK.

By 1995, another defining moment of this period in music was the battle of the singles between the same two bands. Oasis brought out their single ‘Roll with It’ as part of their album ‘(What’s the story) Morning Glory?’, which featured London’s famous Berwick street on the cover. Blur released the single ‘Country House’. Media coverage of the ‘battle’ was high, which turned into a lot of publicity for the bands themselves and is, by some, said to be the core cause of the hype around Britpop itself.

Apparently, the at-first friendly competition turned sour quickly after an alleged fight in a pub within London’s Camden Town: the epi-centre of Britpop at the time. The Good Mixer, the same pub where other Britpop band Elastica was signed to its label, was located close to the indie labels that were scattered all over Camden Town, and was therefore favoured by a lot of the artists and musicians working close by.

Although this feud was not accidental, as managements were heavily involved in bringing it to the attention of the masses, it did benefit Oasis substantially more than it did Blur. Blur eventually won the battle of the singles with about 274.000 copies sold against Oasis’ 216.000 copies. But even though not many people realized this back then, Blur was significantly more popular and at least a lot bigger in album sales at the time. This led to the media attention eventually benefitting Oasis substantially more than Blur, making it a self-sabotaging management mistake on Blur’s side. Although they won the original battle, Oasis walked out victorious with more media attention than they could have ever generated on their own. 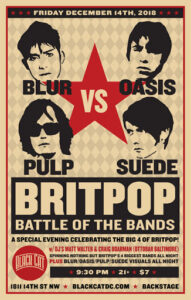 For the next year and a half, Britpop was at the peak of its success. Britpop bands were topping the charts, the ongoing feud kept showing up in the media and album sales were as high as ever. This was also the time in which The Verve brought out their album Urban Hymns with thereon their hugely successful single ‘Bittersweet Symphony’. Other artists bringing out music, Radiohead being a perfect example of this, were classified under Britpop even though they were not necessarily making the kind of music associated to it. As Britpop was definitely at its peak, eventually in 1997, it also saw its inevitable decline.

Oasis brought out their third and highly anticipated album ‘Be Here Now’. While the album sales were in line with the success they had had up until that point, the album critics were extremely underwhelmed. Blur, in addition to this, branched out and made way for a different kind of sound by bringing out a self-titled album that had more of an American lo-fi character than what was initially expected of them. Other bands and artists started to appear on the top of the charts with sounds that were much softer and more accessible to the masses, with Coldplay being a prime example of this. Most of the bands that had been part of this hugely successful (but short-lived) movement faded into the inevitable darkness.

Looking back at this period in music history, you can’t help but notice only a few of the wildly successful musicians from back then are still part of the scene today. The Gallagher’s, although in a feud of their own and split-up, do still have relatively successful careers. Blur also kept its status in the industry and is (in the UK) still remembered as one of the greats. Although this period in music was short-lived and is now, rightly, seen as more of a cultural moment than a real genre, credit where credit’s due: Britpop continued building that road for UK artists that bands in the 60’s and 70’s had started, while inspiring a whole new generation of British musicians along the way.