The Origins of Lo-Fi

Light distortion, jazz samples, fuzzy vinyl sounds, and the light crashing of waves. No CD’s, no live concerts, little to no lyrics, and no commercial music videos. These are some of the most notable traits of what is now known as lo-fi music. You could even say that these key characteristics are the defining factors of lo-fi as a genre. But, how can you fully explain the origins of a genre that essentially does not want to be defined?

To be contradictory, the technical definition of lo-fi music is “the inclusion of elements normally viewed as undesirable in professional contexts, such as misplayed notes, environmental interference, or phonographic imperfections (degraded audio signals, tape hiss, and so on).”[i] Although these sounds are very common in lo-fi music, none of these sounds have to be present for a piece to be considered lo-fi. This is because the lo-fi genre is home to many new, niche, emerging subgenres –which makes exploring the origins of this kind of music confusing, yet interesting. 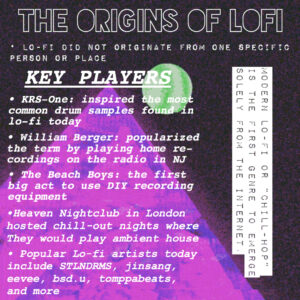 Before looking back into where lo-fi started and how it rose to semi-popularity, you must understand its current standing in today’s culture, and how its listeners feel about it. Lo-fi has caused quite a stir in recent years – and the people of the internet have many opinions. It has inspired articles with titles like “Lo-Fi Hip Hop is Everywhere and Meaningless”[ii] and “What Makes Lo-fi Hip-hop a Hidden Musical Treasure?”[iii] by sites such as Buzzfeed. “I don’t know why I like lo-fi hip hop so much,” writes user RedditPadawan on R/CasualConversation, “even though I don’t like music that feels repetitive, or when music in that genre [doesn’t] stand out – I still love it.”[iv] A quick google search will reveal that many can relate to this reddit user, being that “why is lo-fi music so popular?” is suggested when searching lo-fi music.

The term “lo-fi” was first commonly used in the 1950’s. It is short for “low-fidelity”, which means low quality. During this decade, young people from all over were inspired to record their own music with the equipment and gear available to them at the time. This is when the classic distortion, fuzziness and tape skip sounds came into play. The Beach Boys were the first big act to use this at home equipment in the 60’s. As the 80’s approached, lo-fi was no longer a term to describe lower quality music; instead, it was an emerging culture which consisted of underground DIY indie rock bands, such as The Frogs, The Mountain Goats, and Beck.[v] Then, from the 80’s to now – with the rising popularity of hip hop – many young people use modern, high tech equipment to emulate the nostalgic fuzziness of the decades of music before them. Essentially, what our generation recognizes as lo-fi or chill-hop, has roots in all genres from the past century, from jazz to rock to rap.

But some may refer to William Berger as the originator of modern lo-fi, because he frequently used the term to describe home recordings he would play live as the host of a radio station in New Jersey in 1986. Others may say that lo-fi came from boom bap rap – popularized by rapper KRS-One – which explains the most common drum samples found in lo-fi today. Additionally, some sources state that lo-fi came from the ambient house music or “chill-out” music that was unique to Heaven Nightclub in London, 1989. But to say that you can point to one true origin of lo-fi on a map would be false.

So, which location was most important to the inception of lo-fi? As previously discussed, lo-fi music as we know it today has roots in almost every well-known genre. Lo-fi was a term to describe low quality DIY music, but today it is a whole culture and aesthetic. So, the only true answer is the internet. In its most modern popular form, it exists solely online, which makes it so unique. Lo-fi music has hidden in plain sight alongside many genres over the years, but all because of the rise of the internet, it has become something bigger: its own distinct genre.

Trying to answer questions about lo-fi’s fuzzy past causes even more questions to arise concerning the future of music, and the possible creation of new genres in this era of the internet. No one person created or popularized lo-fi; rather, young artists of all genres contributed to its growth and current home on the internet. This is what makes lo-fi music the most subtle yet impactful genre of this generation. Learn more about Lo-Fi Hip Hop in LA.