The team of the film God Said give Em’ Drum Machines in cooperation with the Michigan Electronic Music Collective and the TAROTE Foundation streamed Electronic Music with a purpose on Saturday July 11 from 1-9 PM. The event is called Electric Unity and it was an international musical response to aid the Black Lives Matter movement through charity screening of the film Electric Roots. Detroit DJs including Stacey “Hotwaxx Hale”, Reggie Dokes, Killer Robot, Whodat, and a variety of DJs from Michigan Electronic Music Collective will be uniting with DJ Niskerone from South Africa in a virtual #DJ performance. The screening of the film Electric Roots was in support of Black Lives Matter. David Grandison Jr of the Music Origins Project was the host of the Facebook feed. He is a producer on the God Said give Em’ Drum Machines film project and long-standing educational lead for the film, creating virtual tours of the Music Origins Project’s documentation of the locations around the world. This site has documented each of the locations that have been defined as birthplaces of Techno in the film’s Electric Roots and God Said Give Em’ Drum Machines. Here are the locations from the film that you can explore in 360 degree’s via this website, from Music Institute, KMS, MetroPlex and Transmat, Submerge, Archer Record Press, Packard Plant, to locations shot in the film like Cape Town and Tokyo. And of course, Record Time where the legendary Mike Huckaby imprinted his sound on the world.

The Twitch stream featured Detroit DJs playing sets from 1-9pm EST at which time there will be an exclusive screening of the Cannes Film Festival award-winning film Electric Roots: The Detroit Sound Project featuring Richie Hawtin, Black Coffee and interviews with DJ Niskerone on the @OVEE platform. The short film documents the team’s trip to South Africa during the production of the soon-to-be-released film God Said Give ‘Em Drum Machines, that documents the history of Detroit Techno and it’s global reach. 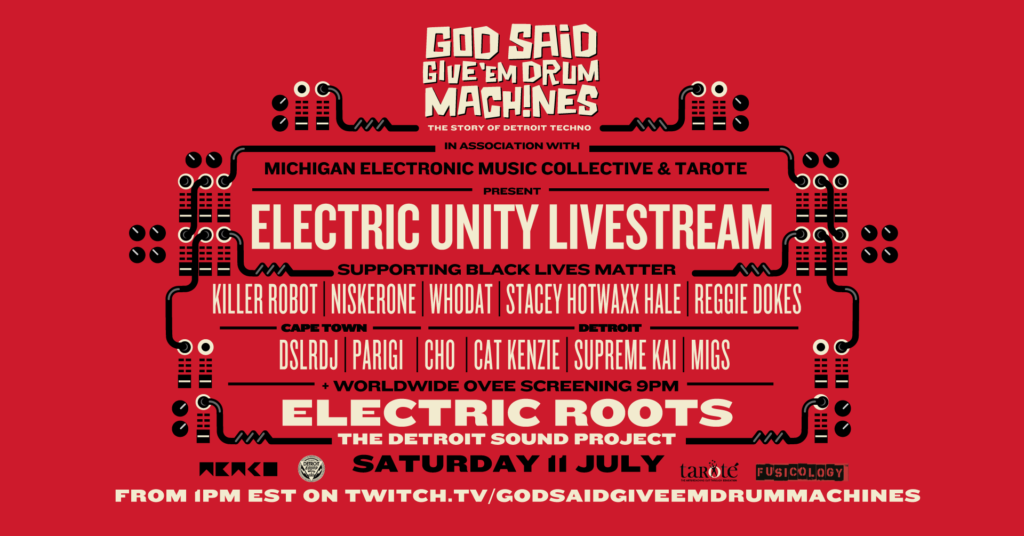