Rosé, The “Pride of BLACKPINK”, stuns on Fallon with record-breaking solo debut. [WATCH] 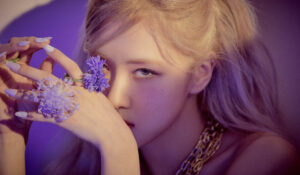 Launched in the summer of 2016, YG Entertainment’s flagship girl band BLACKPINK is nothing short of an utter (and international) phenomenon. After releasing their first album (called “The Album”), their first full-length documentary (Netflix’s “Light Up The Sky”), and their first virtual concert “The Show”, which was virtually attended by over 250,000 of their most diehard fans exclusively on Youtube last January, the BLACKPINK name and franchise has become a juggernaut in their native South Korea and Hollywood, too. But fortunately for us, their “firsts” aren’t stopping there anytime soon. Following fellow member Jennie Kim’s triumphant 2018 excursion, the quartet’s lead vocalist and bombshell Roseanne “Rosé” Park digitally unveiled her inaugural solo project the aptly-titled “R” on Friday, March 12th, 2021.

Two years in the making, “R” features double singles “On The Ground”, a gutsy but sugary sweet Pop anthem based around the 24-year-old’s tumultuous journey towards womanhood, and “Gone”, a stirring, guitar-driven look at Park’s sizable experience with romantic heartbreak. Coming in with upwards of 400,000+ physical pre-orders, both breaking and setting a record for Korean female artists, “R’’ was an immediate and astounding commercial and critical success. Succeeding a well-received set of premieres on SBS music show Inkigayo over the weekend, Rosé brought her talents stateside for NBC’s Tonight Show Starring Jimmy Fallon on March 17th.

What’s next on the schedule for the gainful gals of BLACKPINK? According to YGE, all four are currently in the studio preparing the hotly anticipated follow-up to 2020’s “The Album” with equally-anticipated projects for members Jisoo Kim and Lisa Manoban not too far behind. Watch Rosé’s Tonight Show performance and let us know what you think @musicorigins on Twitter or in the comment section below.