The Music Origins Project has partnered with the Detroit Sound Project and the team from the film God Said Give ‘Em Drum Machines to create a series of lesson plans and teaching resources to help students explore Detroit culture, digital storytelling and about the history of Techno and its origins in Detroit. 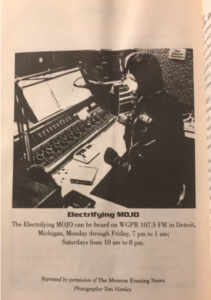 The key radio stations that played “black music” in Detroit in the 80’s, at the time when Detroit Techno was born, were WGPR, WJLB, WHYT and WDRQ. The most influential of all the Detroit radio DJ’s was “The Electrifying” MOJO. MOJO played on several of these stations during his time as an on-air personality and Disc Jockey. And he became a key figure noted by artists as an influence in the birth of Techno. His on-air ideas and his musical diversity set the tone, and laid the template for the evolution of proto-techno by exposing his audience to an eclectic blend of artists who used early synthesizers and drum machines in their music.

MOJO occasionally played jazz artists like Sun Ra’s Arkestra, or jazz fusion artists like Tangerine Dream who were experimenting with electronic keyboards and synthesizers. We can see clear paths from Sun Ra’s Afrofuturism that started in the 70’s. He pioneered space age dress in his persona and his ideas promoted black empowerment and transcendence to ideas beyond this planet, that led to modern afrofuturism as we know it. Many of his afrofuturistic ideas were documented in the early independent film he created titled  “Space is the Place“.

This afrofuturistic blueprint paved the way for other Afro American artists like Mojo to embrace the freedom that space offers for exploration.  MOJO’s sonic artistry followed this path, and he knew no musical bounds, so both jazz and rock were a part of his music curatorial palate. He was known to play sets where deep funk lived along side of funky new wave tracks from Yello, Gary Newman or even rock by Jimmy Hendrix, or Frank Zappa. He was a scholar and philosopher and he wrote a book called The Mental Machine where he shared his ideas with his followers. He also introduced Detroiters to electro tracks like Arthur Baker and Afrika Bambaataa’s Planet Rock and Kraftwerk tracks like “Trans Europe Express”. Somehow he knew the early german synth programmers in Kraftwerk were attempting to channel James Brown in their synthesized rhythms and he shared it with Detroiters and we understood… MOJO was also known for breaking new artists like the B-52s who gave him huge amounts of love for playing their early tracks on the radio first. 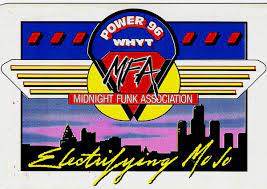 MOJO’s Midnight Funk Association was built on the foundation of the Afro-futurism movement. So all paths led back to Funk and he was the leader of the cult like Midnight Funk Association… and all forms of Funk were explored on his shows, from Parliament Funkadelic and Parlet, to Brides of Funkenstein and Mandrill. Prince’s unique brand of funk also enjoyed featured status on MOJO‘s radio program and Prince would provide him with exclusive interviews whenever he was performing in town. Prince was known to kick off his tours and warm up his band with a week or so of back to back nights in Detroit. After all, Prince was the prince of funk and Detroit was the home of Mojo’s Midnight Funk Association.

DJ’s like Mojo did not mix records throughout his show, (he brought in DJ’s to mix on his show as mixing gained popularity)  he talked to his audience and spread positive afrofuturistic ideas. MOJO was the musical guru who challenged us to explore musical meditation through new sounds and through artists unfamiliar to our musical palates. He was like a music professor who educated his audience and expanded their musical outlook. He is the only “black radio” DJ who could drop a classical track into his set and nobody dared question why… because he gave us what we needed, not necessarily what we thought we wanted…

Just as George Clinton’s  Parliament Funkadelic “Mothership connection” referred to this space age transcendence. MOJO would ceremoniously land “the mothership” every night for his fans to board as a part of his show and this imprinted the afrofuturism movement firmly into the minds of the teens who were early the architects of techno. Deep Space Sound works picked up on the theme and blended it into the sound that they created. Juan Atkins and Rick “3070” Davis birthed Cybotron and crafted a dystopian future hinted to by authors like Alvin Toffler, and they created a future where blacks were programmers and they embraced new technology and even created a new techno speak language. Juan Atkins went as far as to create a techno-speak dictionary as he designed musical vehicles like Model 500 for blacks to be transported into the future worlds with his sounds.

As Detroit radio evolved we listened to a number of other DJs who challenged MOJOs midnight supremacy and were granted prime time radio slots. Among these new younger radio artists were “The Wizard” (a.k.a. Jeff Mills), Derrick “Mayday” May, and Dwayne “In The Mix” Bradley who all had daily radio shows either after school, during rush hour around 5 PM, or late night on the weekends. I would be remiss if I did not mention underground legends like Ken Collier as well, because he was the DJ’s ambassador who brought mixing to Detroit from the Warehouse in Chicago and the Paradise Garage in New York and he shared this gift with all Detroit music audiences; at gay clubs and straight clubs, as well as, on the prolific teen party club circuit.  Ken was so well known he would also make radio appearances from time to time. The Detroit kids who were the architects of Techno were enthusiastic fans of these DJs. We would record their DJ sets on cassette tape, to listen to them, trade them to study their techniques. We tried to figure out how they did their mixing tricks like the record “backspin”, or “Transforming” the scratch… so we could emulate their turntablist tricks document their innovative live on-air mixing artistry for the world to hear.

Detroit DJs like “The Wizard” (Jeff Mills) also approached the role of the DJ as an artist  and he not only mixed on the radio, but he mixed popular music in ways we never heard. He created a pitched-up mash-up of familiar tracks that was so different from the original track that it was his own entirely new art form. He also dropped tracks we never heard and played artists we had not considered. In one of several interviews I had with Jeff Mills for our film project (GSGEDM.com). He shared with me that Detroit was a test market for national radio stations and Detroit radio stations would play much more experimental music that the record industry was not sure would resonate with the general public in Detroit first. This meant Detroit was always ahead of the musical curve. 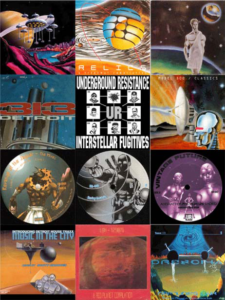 Visual artists like Abdul Qadim Haqq captured the unique afrofuturistic vision of Detroit Techno artists in his album art. His work for the artist collective Underground Resistance, cofounded by “Mad” Mike Banks and Jeff Mills, took afrofuturism even further. Underground Resistance embodied an ethos of militaristic discipline, artistic independence and urban empowerment that Afrofuturism was defined on. Underground Resistance’s group Drexciya took it even further with their mythology of aquanauts, aquatic descendants of slaves whose babies were tossed into the ocean from slave ships and evolved underwater to become an advanced ocean-dwelling race and space-faring warriors. They evolved afrofuturism further by creating artistic concepts like Interstellar Fugitives, Suburban Knight, and groups like Galaxy 2 Galaxy. They all also embraced computer and synthesizer programming and developed the sound beyond Techno creating new genres expanding categorization to include sub-genres like, Ghetto Tech, High Tech Soul,  High Tek Funk and High Tek Jazz.

Sonic Futures: The Music of Afrofuturism

The Music Origin Project’s exploration of modern Afrofuturism took us to a Kennedy Center Symposium series called Sonic Futures: The Music of Afrofuturism. Sonic Futures focused on highlighing three luminaries in Funk and Black Rock. It brought together musical giants who have made monumental contributions to Afrofuturism as we know it today. George Clinton, Nona Hendryx, and Vernon Reid (In Living Color) were joined on stage by world-renowned scholar and critic Alondra Nelson for an hour-long exploration of Afrofuturism – where it came from, where it is going, and what it has to offer us. Opening remarks were by Dr. Gus Casely-Hayford, Director of the National Museum of African Art. The discussion was followed by a sonic exploration of Afrofuturism featuring DJ’s Adrian Loving and John Murphin in the Skylight Pavilion.

Afrofuturism movement has evolved into a musical, literary and cultural aesthetic that combines elements of science fiction, historical fiction, fantasy, Afrocentricity, and magic realism. It has become a new cultural expression that includes but is not limited to music, art, and even clothing. (Gallery Photo Credit: Andre Holmes)