Mike Huckaby graduated from Cooley High School and landed his first DJ gig in 1988 via Detroit fashion designer and party promoter Maurice Malone. He soon began to play and take on residencies at spots like Motor Lounge, Panacea, St. Andrew’s Hall, and the Majestic Cafe. He became well known in Detroit, by refining the tastes of the dance music community while serving as manager and buyer at the legendary Roseville record shop, Record Time, throughout the ’90s.

Huckaby soon began to produce and drop tracks releasing Deep Transportation Vol. 1 and Vol. 2, released on Rick Wade’s Harmonie Park label in 1995 on Rick Wade’s label Harmonie Park. During this period he began to tour more extensively, becoming an international player, and helping forge the connection between Detroit and Berlin performing at the legendary German techno club Tresor in 1997.

His minimal deep house bridged the gap between House Music and Detroit Techno and his growing influence led him to be selected to play in the first Detroit Electronic Music Festival (DEMF) in 2000. By 2002, Huckaby launched his own Deep Transportation label, and its sub-label S Y N T H. He was later asked to serve on the curatorial board for the Detroit Electronic Music Festival (DEMF) in 2003.

Mike’s unique production techniques and obsessive attention to the details of sound creation along with his incredible sampling skills led him to be well respected as a sound designer and remixer. He went on to produce and remix tracks for Deepchord, Juan Atkins, Vladislav Delay, Pole, Loco Dice, LoSoul, and many others.

“With a musician’s ear and a scholar’s sensibility, Huckaby adventurously and diligently bridged the emotive sounds of house music with the precision of techno. He was an avant-garde jazz fan with an interest in philosophy, fascinated by the relationship of music and mathematics.” Detroit Free Press

His in-depth knowledge of production synthesizer programming, music production software, and sound design, enabled him to carve out a niche lecturing globally.  He was asked by Native Instruments to program sounds for their music production software and they asked him to lead workshops and courses in sound design and production. Huckaby was an educator who not only influenced the global musical community but he also believed in reached back into his community helping young musicians and beat makers in Detroit, by teaching courses on Ableton other digital music production software at Youthville. He quietly guided and mentored several globally renowned artists like Kyle Hall and Jay Daniel as teens in this youth center. He also taught masterclasses to packed rooms at the Red Bull Music Academy in Detroit. 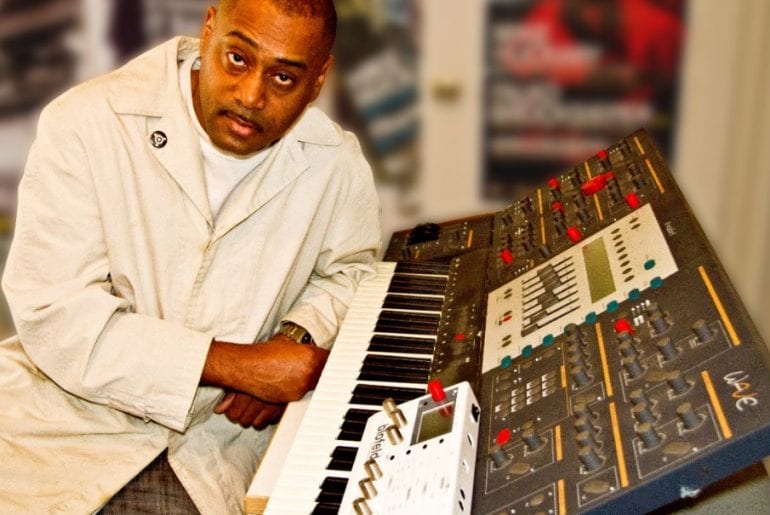 Huckaby was a lover of the experimental jazz of Sun Ra and he re-edited and performed sets of his work using reel-to-reel decks. Remixing the jazz icon’s music was a labor of love and he shared the love of the avant-garde experimental jazz with the younger artist keeping the Detroit jazz legacy alive. He produced a series deep Sun Ra edits for the Amsterdam label Kindred Spirits.

In 2019, Huckaby traveled to eight countries, performing more than 40 shows. He was also scheduled to take the stage in the 2020 Movement festival which was rescheduled from Memorial Day weekend to September due to the pandemic. When Mike unexpectedly passed due to a stroke and complications due to COVID 19 he left a huge void in the Detroit music community that will be hard to fill. His influence on multiple generations of musicians, producers, and sound designers is a legacy that will live on in the hearts and minds of dance music lovers around the world.