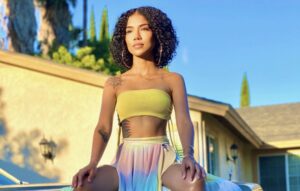 Standing at a mere 5’2 and supremely soft-spoken, Los Angeles-native Jhené Aiko, 32, wouldn’t necessarily strike a normal passerby as a force of near-epic nature but quite often our culture’s greatest heroes and heroines come in the form of its tiniest and most humble packages. Since the start of her career in the early 2000s, much of which she spent recording and appearing alongside popular R&B boyband B2K and Swedish girl group PLAY, Aiko has devoted herself to keeping her head above life and the industry’s ever-changing waters and teaching others, including her own peers, how to do the exact same.

After taking a few years’ long hiatus upon the release of 2017’s psychedelic “Trip”, Aiko announced the arrival of her new album “Chilombo” in mid-2019. The sonic culmination of several months spent songwriting on the Big Island of Hawaii, “Chilombo” (which hit stores on March 6th, 2020) takes her loyal listeners on a journey through the heart, soul and mind of a woman finally found content. Though not wholly dissimilar from her past projects, where her previous work focused on the trials and tribulations stopping her from finding the inner peace that she desperately seeks, “Chilombo” sees Aiko refusing to ruminate and instead become her own shelter amongst the ongoing storm(s). Debuting at #2 on the Billboard Top 200 Albums Chart and closing 2020 with over 500,000 copies sold (and its saucy summer-themed deluxe edition adding even more to the overall tally), Aiko, through the surprise success of ‘’Chilombo”, has quietly emerged as one of America’s leading beacons of new-age soul. 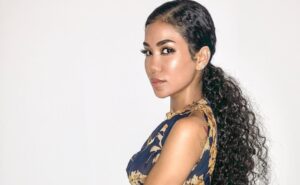 And said soul derives itself distinctly from her occasionally turbulent upbringing on the country’s sparkling but rambunctious West Coast. Post being ravaged by the effects of the HIV/AIDS and Crack Epidemics, citizens of urban Los Angeles turned restless, channeling their anger, hopes, fears and dreams into a genre called Gangsta Rap in the mid-late 1980s. The scene would explode in the early ‘90s due to acts like Ice-T, N.W.A., Snoop Dogg (whom Aiko calls a close friend), and most famously actor, rapper, poet, and activist Tupac Shakur. But while those aforementioned icons and their equal parts emotionally and politically-charged discographies would take up a majority of the headlines at the time, yet another unique form was beginning to trend. Drawing its inspiration from Gangsta Rap and 1970s Funk anthems, G-Funk or Gangsta Funk caught on like wildfire, transporting patrons from all over the globe to the sunny streets of Compton, Oakland, or Long Beach, CA via its signature silky smooth production and brighter, breezier beats. Combining gritty, confessional-style lyrics, sleek vocals, nubile bravado, street-smart collaborations and a radio-friendly bounce, “Chilombo” takes the very best of a bygone era and splendidly repackages it for a modern world.

A perennial favorite amongst Millennial and Generation Z R&B aficionados and stars alike (up and comers Normani, UMI, Kehlani, and Summer Walker have all listed her as an inspiration and/or frequent creative partner) and certainly no stranger to setbacks or sorrow, Aiko has survived many a surge and resurfaced all the wiser, stronger and ready to lead and lead she now undoubtedly does. Hip-Hop and R&B in the 2010s may have seen the meteoric rises of Southern, Eastern and Northern mainstays like 2chainz, Bryson Tiller, J. Cole, The Weeknd, and Young Money’s Drake and Nicki Minaj but thanks to a steady stream of both critically-acclaimed and commercially successful albums, EPs, singles and mixtapes by a 5’2, supremely soft-spoken girl from “Slauson Hills”, the allure of California Cool never quite faltered. Fierce, fiery, sprightly, and buoyant, Jhené Aiko… like her music, has sailed many seas and we are assuredly better travelers for having accompanied her.