The Gorillaz are dropping a epic mixed media performance of Song Machine Live! The global live stream, will offer 3 performances across 3 different time zones. Each performance will becoming to you live and direct from London on December 12 & 13th. These livestreamed concerts were their first official live shows since 2018. Billed as Gorillaz Song Machine Live From Kong, they were shot in the basement of Kong Studios in London.

All performances feature a 14-piece live band led by Damon Albarn and a range of featured talent including Beck, JPEGMAFIA, Fatoumata Diawara, Kano, Leee John, Peter Hook, Slowthai, ScHoolboy Q, 6lack, Chai, Earthgang, Georgia, Roxani Arias, and Slaves. Many of the artists like Fatoumata Diawara, and JPEGMAFIA appear on stage with the band as holographic avatars and appear to interact with Damon Albarn and the band.

Gorillaz are a virtual band launched in 1998 by producer/musician Damon Albarn, Jamie Hewlett. The origin story of the musical project happened when comic artist Jamie Hewlett met guitarist Graham Coxon, a fan of Hewlett’s work, asked him to interview his band Blur, which Albarn and Coxon had recently formed in 1990. 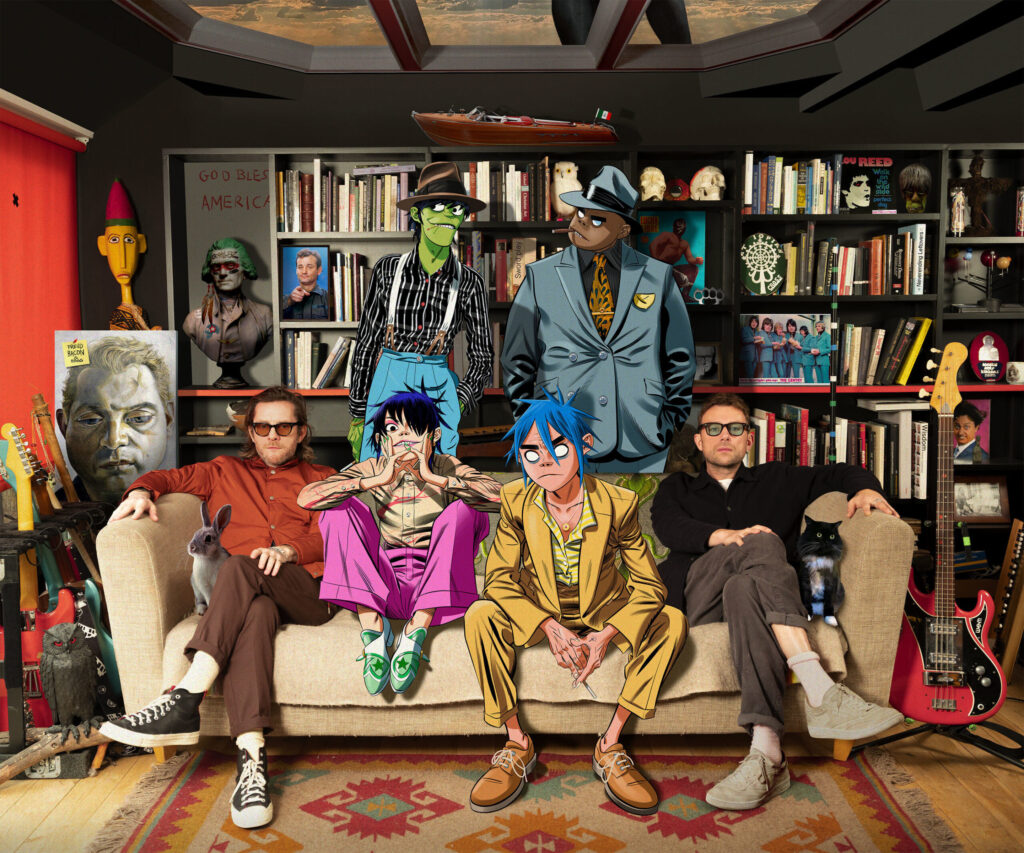 The band is consists of four animated members: 2-D, Murdoc Niccals, Noodle, and Russel Hobbs. Their fictional universe is presented in videos, interviews and short animations that provide context to the dystopic, musical, cartoon universe. In the real world, Albarn is the only permanent musical contributor, and Gorillaz’ music showcases a wide range of collaborations with top artists. The artists Remi Kabaka Jr. became producer for the band in 2016 after several years providing the voice of Russel Hobbs and was listed as an official member alongside Albarn and Hewlett in the 2019 documentary Gorillaz: Reject False Icons.

On 29 January 2020, the band dropped its project Song Machine with 11 episodes releasing to comprise the first “season” of Song Machine project. Tossing the typical album format of releasing music, Song Machine is instead a web video series in which the band released one new song each month as “episodes” in the series.

Purchase your tickets to the Live Stream here.

The band was cited in Guinness World Records as the world’s “Most Successful Virtual Band” having sold over 23 million records worldwide. They have won a Grammy Award, 2 MTV Video Music Awards, an NME Award and 3 MTV Europe Music Awards. They have also been nominated for 11 Brit Awards and won Best British Group at the 2018 Brit Awards.