With a mission to inspire, educate, and empower the creation of new, experiential and exploratory art forms, ARTECHOUSE connects an audience to the arts, and stimulates interest in the limitless possibilities of technology, science and creativity.

Dedicated to showcasing experiential and technology-driven works by artists who are forerunners of the new age in the arts and technology, ARTECHOUSE changes the world of art as we know it. Since its opening in June 2017 in Washington, DC ARTECHOUSE has welcomed over 400,000 visitors and has captivated a global audience making headlines in New York Times, BBC, USA Today, National Geographic, CNN, Washington Post and numerous other national and international media outlets as the premier contemporary art space.

“Certain things words just cannot describe…they must be seen and experienced… In every city there is a space for fine arts, theater, music, films, etc. Our goal is to create an innovative, new age arts destination dedicated to experiential and exploratory arts that is created at the intersection of art, science and technology,”  Sandro, Founder & Art Director of ARTECHOUSE.
IMG_3495 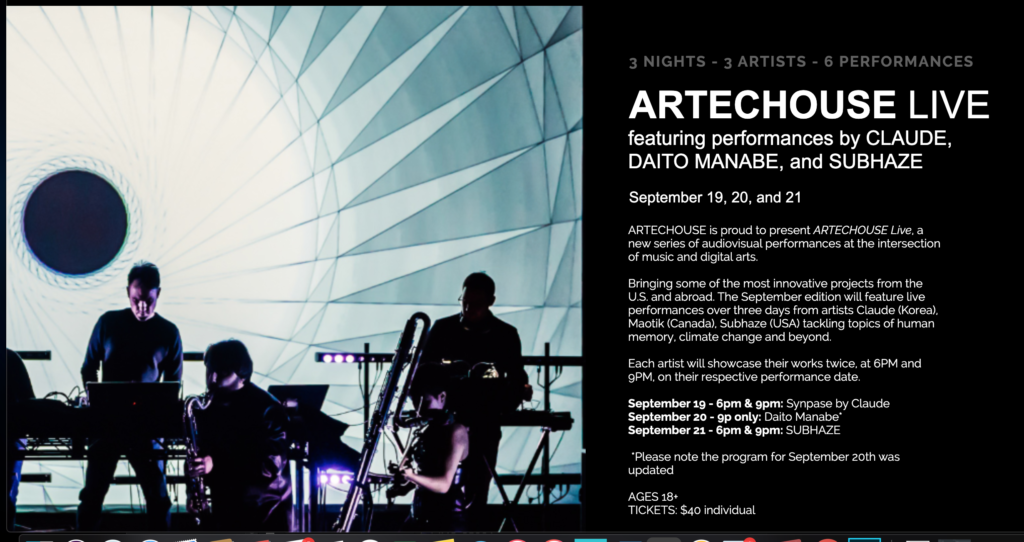 In Title_Synapse CLAUDE expresses the complex nerves and movements of organisms in the parts of human memory, emotions. With a focus on nature and human psychology he creates real time audio-visual works with glitch, noise sounds while reacting to 3D generative visuals.
The audience has their perception of memory and emotions altered by blurring the boundaries of their senses while being immersed in a 3D world of curved organisms and glitch sound in.
@claude_music 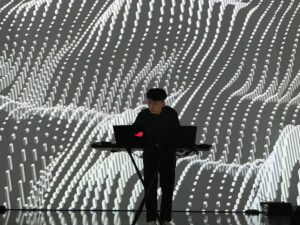 Tokyo-based artist, interaction designer, programmer, and DJ, Daito Manabe is one of the most renowned digital artists in the world. Manabe pushes the boundaries within technical, musical and creative unexplored territories. He is also composer and VJ/DJ. In 2015, Manabe developed the imaging system for Björk’s music video “Mouth Mantra”, and oversaw the production of AR/VR live imaging for her “Quicksand” performance. His wide repertoire spans from hip-hop and IDM to juke, future bass, and trap. Manabe has also been invited to perform at numerous music festivals around the globe including the Barcelona Sónar Festival 2017 and Coachella 2016.
www.daito.ws