Less than nine months in and the four young members of behemoth record label SM Entertainment’s half-human, half-Artificial Intelligence girl group AESPA are already well on their way to dominating the creative and philosophical conversation(s).

Debuting with single and unofficial theme song “Black Mamba” in November of 2020, Karina, Winter, Giselle, and Ningning splashed onto the scene, causing both mass fanfare and a fair amount of controversy after formally introducing the “cyberpunk idol” to the South Korean public and far, far beyond. 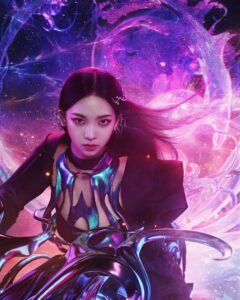 Paired with their own individual æ (pronounced eye) or avatars that serve as the digital manifestations of each girls’ deepest (and admittedly “darkest”) thoughts, needs, wants and desires, Karina, Winter, Giselle, and Ningning, alongside æ-Karina, æ-Winter, æ-Giselle, and æ-Ningning represent where we are now and where we very well could be in the near future. Though we aren’t quite as technologically advanced as the Flat (the location where the æ reside when not actively “synked” with their flesh and blood counterparts) 15 years ago much of what we do have now was simply unimaginable. With the click of a button or a slight tap on our touchscreens, almost any of our wildest dreams can come true. So, what can we do when said electronic elation proves easily corruptible on a rather grand scale and those dreams slowly start to turn into our worst collective nightmare? According to SM Entertainment, we call AESPA. 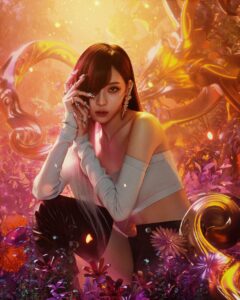 Released on the evening of May 17th as our first sample of their forthcoming full-length album, “Next Level” picks up right where we left off, continuing their in-realm storyline and chronicling the band and æ’s journey into the heart of Kwangya, a mythical No Man’s Land home to powerful and unrecognizable forces that finds itself serving as a temporary lair for a mysterious entity and virus bent on global destruction known only as the Black Mamba and supposedly holds the key to its ultimate undoing. Fierce, layered, and filled with show-stopping beat drops and vocals, “Next Level” and its accompanying mini-movie Ep1. Black Mamba aimed to grab formerly befuddled audiences and fully emerge them into AESPA and their label mates’ “cinematic universe”.. and unsurprisingly, it worked. Ranking in the top 10 across several major South Korean charts and streaming platforms and amassing over 75 million views on Youtube alone, it looks like the ensemble’s allure and lore will likely only grow larger and larger from here on out. 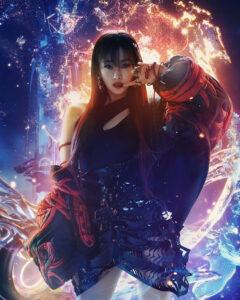 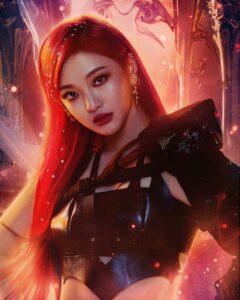 Following in the hallowed footsteps of dozens and dozens of their Kpop predecessors, Karina, Winter, Giselle, and Ningning are utilizing a concept or concepts to help establish, enhance and drive their audio and visual storytelling (as well as their commercial brand) and with the near-constant digitization of our everyday lives and the possibilities and fear that comes alongside it, the mystique of AESPA, their virtual crime-fighting avatars and the impending showdown between simulated good and evil in Kwangya, this concept may very well take on a full life of its own. Watch the official video for “Next Level” and Ep1. below and tell us what you think!